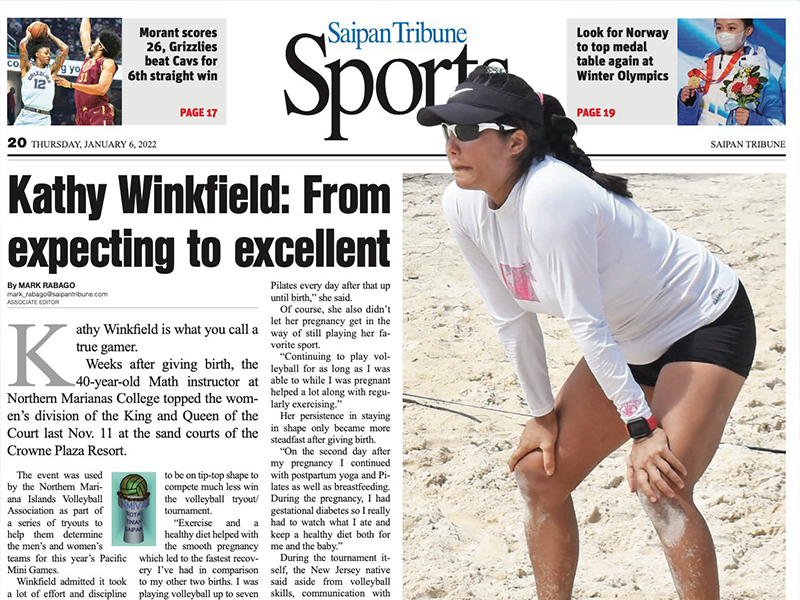 Kathy Winkfield is what you call a true gamer. Weeks after giving birth, the 40-year-old Math instructor at Northern Marianas College topped the women’s division of the King and Queen of the Court last Nov. 11 at the sand courts of the Crowne Plaza Resort.

The event was used by the Northern Mariana Islands Volleyball Association as part of a series of tryouts to help them determine the men’s and women’s teams for this year’s Pacific Mini Games.

Winkfield admitted it took a lot of effort and discipline before and after giving birth to be on tip-top shape to compete much less win the volleyball tryout/tournament.

“Exercise and a healthy diet helped with the smooth pregnancy which led to the fastest recovery I’ve had in comparison to my other two births. I was playing volleyball up to seven months and doing yoga and Pilates every day after that up until birth,” she said.

Of course, she also didn’t let her pregnancy get in the way of still playing her favorite sport.

“Continuing to play volleyball for as long as I was able to while I was pregnant helped a lot along with regularly exercising.”

Her persistence in staying in shape only became more steadfast after giving birth.

“On the second day after my pregnancy I continued with postpartum yoga and Pilates as well as breastfeeding. During the pregnancy, I had gestational diabetes so I really had to watch what I ate and keep a healthy diet both for me and the baby.”

During the tournament itself, the New Jersey native said aside from volleyball skills, communication with your partner and a positive mindset as well as staying hydrated and focused went a long way in determining her success.

NMIVA president Somia Quan was completely in awe with Winkfield’s performance during the tryout.

“Kathy Winkfield is a tough woman and competitor. If anyone was going to compete, let alone win, a beach volleyball tournament a couple weeks from having a baby, it was going to be her! It was unbelievable and fantastic!”

Asked who she is dedicating her almost superhuman win in the King and Queen of the Court, Winkfield’s ready answer was her husband—Jacoby.

“I want to thank my husband for the support of being able to continue playing despite our busy schedules and pushing me to try out,” she said.

The now mother of three said as if it’s not already obvious, she really is hoping to be selected to the CNMI National Beach Volleyball Team for the Mini Games that the islands will be hosting for the first time ever this year.

“I am really looking forward to representing the CNMI in this year’s Mini Games if I get picked. I have been wanting to for a while but every time I wanted to previously, I was either away, giving birth, or unqualified to compete.”

Winkfield first spiked a volleyball in high school. That kicked off a 22-year love affair with the sport that even saw her play competitively in Japan.

“My high school only had volleyball as a team sport during my senior year so that was the first time I played on a team and was also the co-captain of the team. Then in college, I played intramural indoor volleyball and then started beach volleyball and competed in tournaments at the beach.”

When she moved to Japan after her studies, Winkfield played nine-man volleyball for four years before returning to the U.S. mainland where she continued to play indoor, grass, and beach volleyball and competed in tournaments in New Jersey and Pennsylvania.