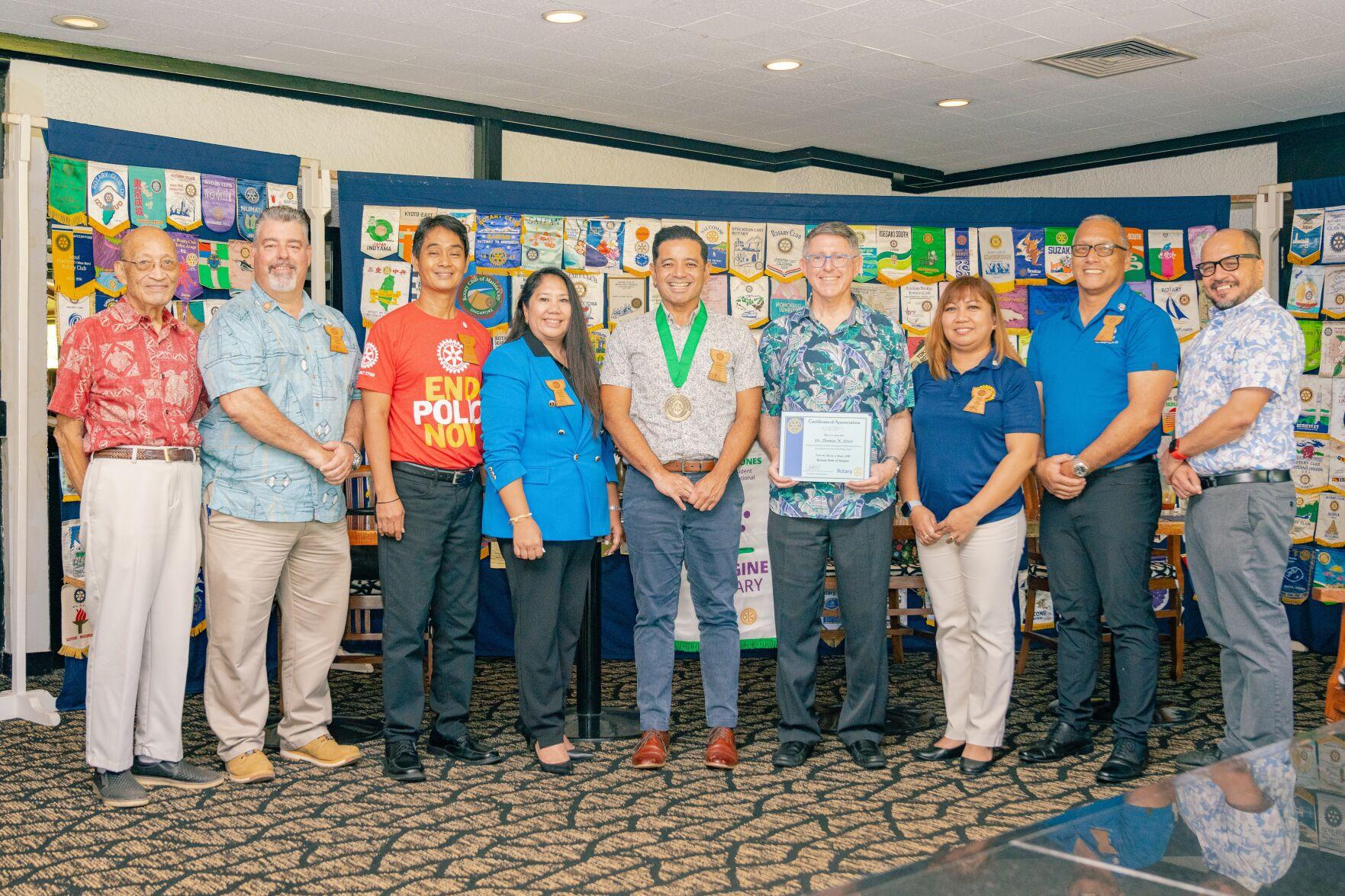 NORTHERN Marianas College Vice President for Administration and Advancement Frankie Eliptico on Tuesday was awarded by University of Guam President Dr. Thomas W. Krise the "Milåyan Presidenten” or The President’s Medal — the highest award given by the UOG president to individuals outside the university who demonstrated distinguished services in accomplishing UOG's mission, which is to enlighten, to discover and to serve.

Krise, who was the Rotary Club of Saipan's guest in its weekly luncheon meeting at the Hyatt Regency Saipan's Giovanni’s Restaurant, took the opportunity to honor Eliptico.

Also in the meeting was NMC President Dr. Galvin Deleon Guerrero who, in introducing his counterpart, said, "I am very excited for Dr. Krise to speak to you because since both of us becoming president, we've reinforced the partnership between UOG and NMC and really throughout the entire Micronesia."

For his part, Eliptico said, “I’m honored by the recognition, and share it with the amazing team I work with at NMC. I also want to thank Dr. Krise and his team at UOG for their willingness to collaborate on many initiatives. We have all worked hard to elevate the partnership between the institutions.”

On behalf of the UOG, Krise told the Rotarians that they've been really pleased to have such strong partnership with the CNMI particularly with NMC, its president, Deleon Guerrero, and vice president for administration and advancement, Eliptico.

Krise said Eliptico, who became NMC's interim president in the same month he became UOG president, "led the college through two of the biggest crises, I think, to face any college everywhere," referring to Super Typhoon Yutu, which destroyed most of NMC campus, and the onset of the Covid-19 pandemic.

Krise said Eliptico "really has done a remarkable job in a kind of surprise leadership role, really remarkable all the way through."

Besides  NMC's receiving millions of dollars in grants and loans, the college’s enrollment also increased even as other colleges across the U.S., UOG and Guam Community College included, saw a decline in theirs.

Krise said with Eliptico as interim president, the partnership between NMC and UOG "really accelerated."

He said Eliptico has been on the forefront of UOG's 3-Plus-1 program in Criminal Justice, which allows students at NMC to stay on Saipan while completing a bachelor's degree with UOG.

Krise said Eliptico has also been "a champion" of the Western Interstate Commission on Higher Education, which “does a number of things with 26 states and territories in the western part of the U.S.,” including offering caps on the out-of-state tuition for students from the CNMI, Guam and others in the region that makes the tuition cheaper for them.

He said Eliptico has not only been an advocate "in trying to get all of us to join, but he is also a commissioner of WICHE. So that has been an important way to show real leadership and to foster partnership in the region."

Krise noted that Eliptico was chosen as the Communicator of the Year for the Western U.S. Region of the National Council for Marketing and Public Relations, and has chaired the Northern Marianas Humanities Council board. Eliptico is also a member of the board of governors of the Asia-Pacific Association for Fiduciary Studies.

“Frankie is a super-connector,” Krise said. “If you want to get anything done, talk to him and he’ll know people, and he’ll be happy to connect you with them.”